Puppy power: how to secure pets safely in a car

As cute as they might be, putting pets in a car is no laughing matter. I speak from experience. When my children finally twisted mum and dad’s arm into getting a puppy, it quickly became apparent that the mischievous mutt had a taste for our car’s furnishings and would rather be sat in the front with us than in the boot.

This presented a unique set of problems. The estate car we drive, a Toyota Auris Hybrid Touring Sports, comes with a luggage restraint, which reaches to the roof and is designed to keep the week’s shopping or a kid’s bike out of harm’s way. However, it was no match for our cockapoo puppy.

Like a determined dog agility contender, our puppy found a way around the edges of the luggage restraint. This was unsafe for puppy and us, when driving. And we soon discovered that he was more interested in gnawing parts of the car than any of the chewable toys we’d give him.

Something had to be done…

What the law says about pets in cars

Rule 57 of the Highway Code makes clear that the driver is responsible for making sure dogs or other animals are suitably restrained in a vehicle. This is so they can’t distract you or injure you or themselves if you stop quickly.

Our Toyota estate car is fitted with an optional ‘cargo net barrier’. This is an extendable net that can be raised, lowered, attached to the back of folded seats or removed entirely. It’s not cheap, costing £198.

After finding that it couldn’t outwit our cunning cockapoo, we considered fitting a solid metal dog guard. A bespoke item from Toyota costs £227, which seemed about as appealing as letting a puppy use your mobile phone as a teething toy.

An aftermarket dog guard for that model of car costs around £130, and a universal version, with adjustable end bars, is about £50.

We were about to plump for an aftermarket Travall guard for the car, when a new problem surfaced: the puppy had taken more interest in chewing the boot carpet, which stood proud of the rubber boot liner, than the teething toys we’d placed in the boot with him.

It called for a new approach – a puppy cage.

Choosing a dog cage for a car

A puppy or dog cage is a good solution for transporting dogs securely and safely. And as we discovered, it’s affordable too. Prices start from around £20 for a small cage with one door and rise to £100 for the largest versions with two doors.

These are much more robust than fabric cages, meaning it’s possible to place a bag on top of them, for example.

The RSPCA advises that as a minimum your dog must be able to sit and stand at full height, turn around, stretch out, and lie down in a natural position. It also suggests that pet owners introduce the cage at home first and let the puppy explore the cage of their own accord, until they will happily wander in and out. 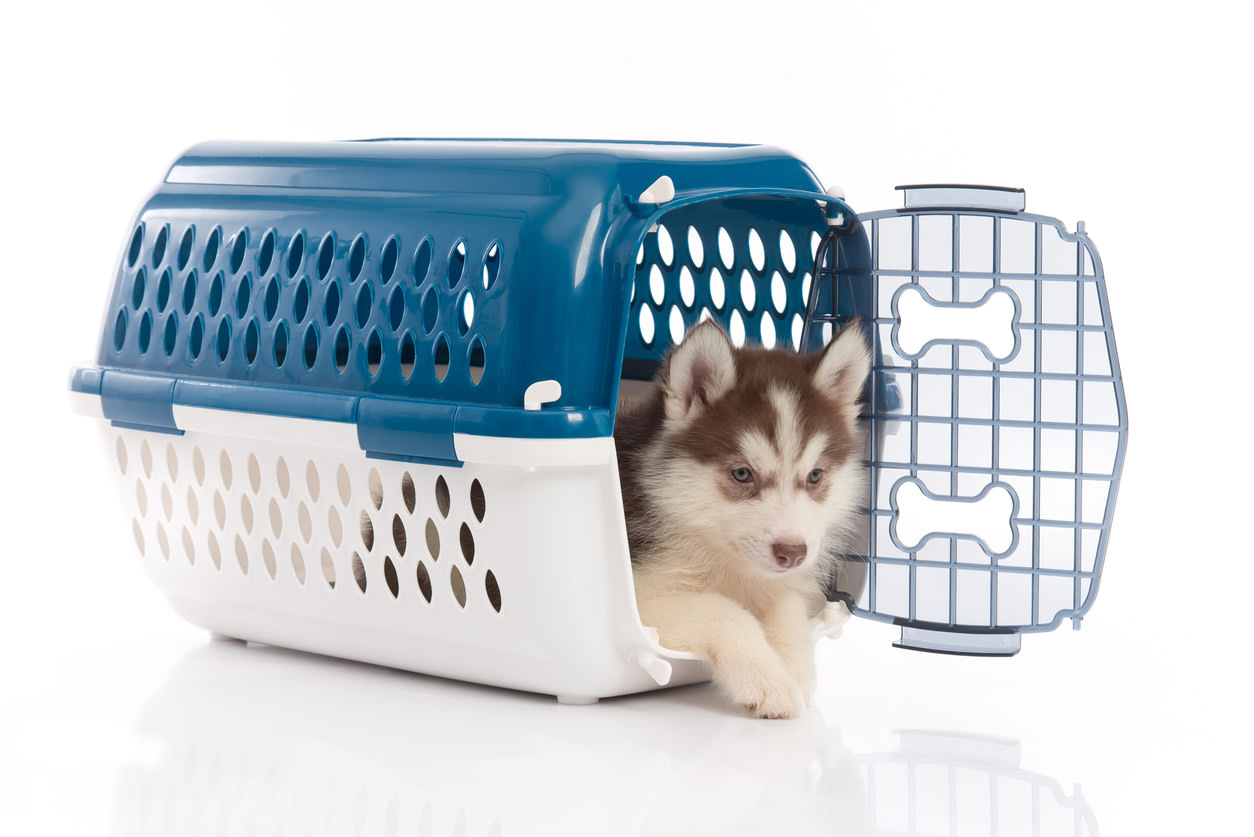 Measuring a car boot for a dog cage

Before making a selection, it’s important to check the dimensions of the car’s boot. If you’re going to place the cage longitudinally, be sure to measure from the top point of the seat back (or any intruding luggage cover) to the most prominent part of the inside of the tailgate. This will let you check that the boot will close once the cage is in place.

To take the measurements, you’ll need to arm yourself with a tape measure, climb inside the boot and have someone close it for you – and open it again when you’ve finished…

Also consider which sides you want the doors to be on, and make sure it comes with a plastic floor tray, which can be easily cleaned in the event of an animal accident.