Android Auto and Apple CarPlay are designed to give drivers a visual and audible link to their phone. They do this by recreating some of the phone’s key features on a car’s dashboard display screen, with user-friendly graphics and voice-operated commands, which mean drivers can use certain features in comparative safety.

Here, we explain Android Auto, its features and ask whether it’s worth having on a car.

Which company is behind Android Auto?

There’s a clue in the name. Android Auto comes from the same company that brings the Android operating system to smartphones: Google. It was introduced in 2014 and there have been several significant upgrades since.

You are spoilt for choice, as most of the big name-brands offer phones with the Android operating system. That includes HTC, Huawei, Lenovo, LG, Nexus, Pixel (by Google), Samsung and Sony. They need to be running the 5.0 ‘Lollipop’ operating system.

How much does it cost?

The good news is it’s free to download, from the Google Play store. The bad news is that it’s important to check your data allowance with your mobile phone network provider. Android Auto’s features – such as navigation or music streaming - tend to use a lot of data. 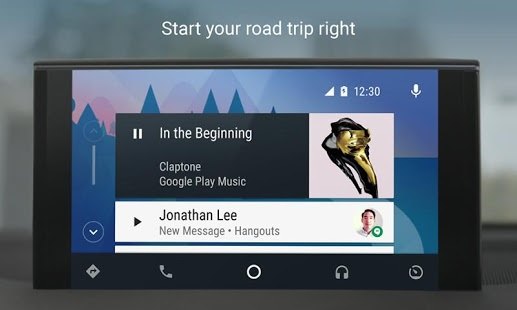 How is it different to using a smartphone?

Android Auto effectively plugs a smartphone into a car, using a USB cable, and replicates many of the phone’s favourite features on the car’s touchscreen display.

It uses a combination of simple, large graphics that make it easy to operate on the move, voice-control so drivers can keep their hands on the steering wheel, and it can even be operated through buttons on a car’s steering wheel.

Can old cars use it?

They can, following upgrades to the system. Originally, Android Auto relied upon cars having a touchscreen system built into the dashboard. If you didn’t have one, you needed to have a touchscreen head unit installed retrospectively. These cost from roughly £140 up to almost £1000.

Google has since updated Android Auto so that a smartphone can be mounted in a cradle and set to the user-friendly operating mode. However, it is vital drivers understand the legal implications here.

What are the laws around using a smartphone when driving?

It’s illegal to handle any kind of mobile phone when driving, even if stationary in traffic. Any driver caught handling their phone will be hit with six penalty points on their licence and a £200 fine; newly qualified drivers with less than two years’ experience on the road will be banned from driving.

It’s because smartphones are generally small, fiddly and very distracting, making anyone that uses them at the wheel a danger to themselves and other road users.

However, the law says that if a phone is mounted in a cradle, and features hands-free operation, it can be used. Android Auto supports voice-activation, so if a driver says: “Okay Google,” the smartphone effectively wakes up and will accept voice commands.

What does Android Auto do?

The first noticeable feature is that the home menu has simple graphic icons for a smartphone’s most popular and relevant features. These typically include navigation, music, phone and messaging. Users can personalise the apps and information that are displayed.

One of the most useful functions for drivers using Android Auto is Google Maps. This is navigation with easy-to follow instructions, good search capability and real-time traffic conditions, with suggestions for alternative routes if time delays could be avoided.

Hands-free phone calling is equally helpful. Simply say the name of the person you’d like to call and the system will take care of the rest. Or if you receive a text message, it can read it out so you’re able to keep your eyes on the road.

Another favourite with drivers is music. It’s possible to listen to a collection stored on the phone or stream tracks over the phone’s mobile network using the services such as Google Play or Spotify.

A wide choice of apps is available with Android Auto, from WhatsApp to the BBC Media Player. Browse the choice in the Google Play store.