More than 100 five-foot tall bee sculptures were decorated by artists and children and displayed around the city, with a further 130 smaller bees dotted about. A free smartphone app helped beekeepers notch up as many souvenir photos and Instagram posts as possible.

The purpose was to celebrate the artistic culture of Manchester, bring together communities and businesses and raise money for charity. A gala auction saw individuals and companies, including CarFinance247, bid for the large bees – successfully raising more than £1.1 million for We Love MCR, a charity founded to support community projects around Manchester and help young people find a sustainable career.

Why was a bee chosen as the symbol of the Bee in the City project?

Since the 1800s the people of Manchester have used the bee as a symbol of their attitude to hard work and tenacious spirit. More recently, notably following last year’s terror attack at Manchester Arena, the bee has come to symbolise more than this, evolving into an icon of defiance, community and solidarity.

What was the purpose of the Bee in the City trail?

The bee trail is claimed to be the most ambitious public art project undertaken by Manchester. The objective was to encourage locals and visitors alike to explore the landmarks of the city and discover lesser-known areas that have played a part in its history.

How big were the bees and what were they made from?

The biggest bees were five feet (1.5m) tall and weighed about 60kg. Moulded from fiberglass, they were effectively designed as a blank canvas, to which artists and school children could add their bespoke designs.

Which designs stood out?

The range and variety of designs were fascinating. Arguably the most popular was Bee United. Painted by Joseph Venning, it was sponsored by Manchester United Football Club and depicted some of the club’s footballing legends.

After the Bee in the City trail ended, it went on to raise £36,000 at auction. On the night, organisers provided a surprising lot; a blank Bee to be painted by the winner’s choice of a Bee in the City artist, which raised £22,000.

CarFinance247, which is based close to the university district of Manchester, successfully bid for AuBee, contributing £22,000 toward the £1.1m funds raised through the initiative.

Who designed the AuBee?

AuBee was designed by Hydro Monkeys, a car customisation company, based in Sunderland. Ian Collinson, one of its founders, said the transformation took two days.

After rubbing down the fibreglass to get a perfectly smooth finish, a base coat was added first, then a layer of real silver metal was applied and activated using chemicals and cleaned with distilled water before a tinted topcoat was added to give the gold-effect finish. 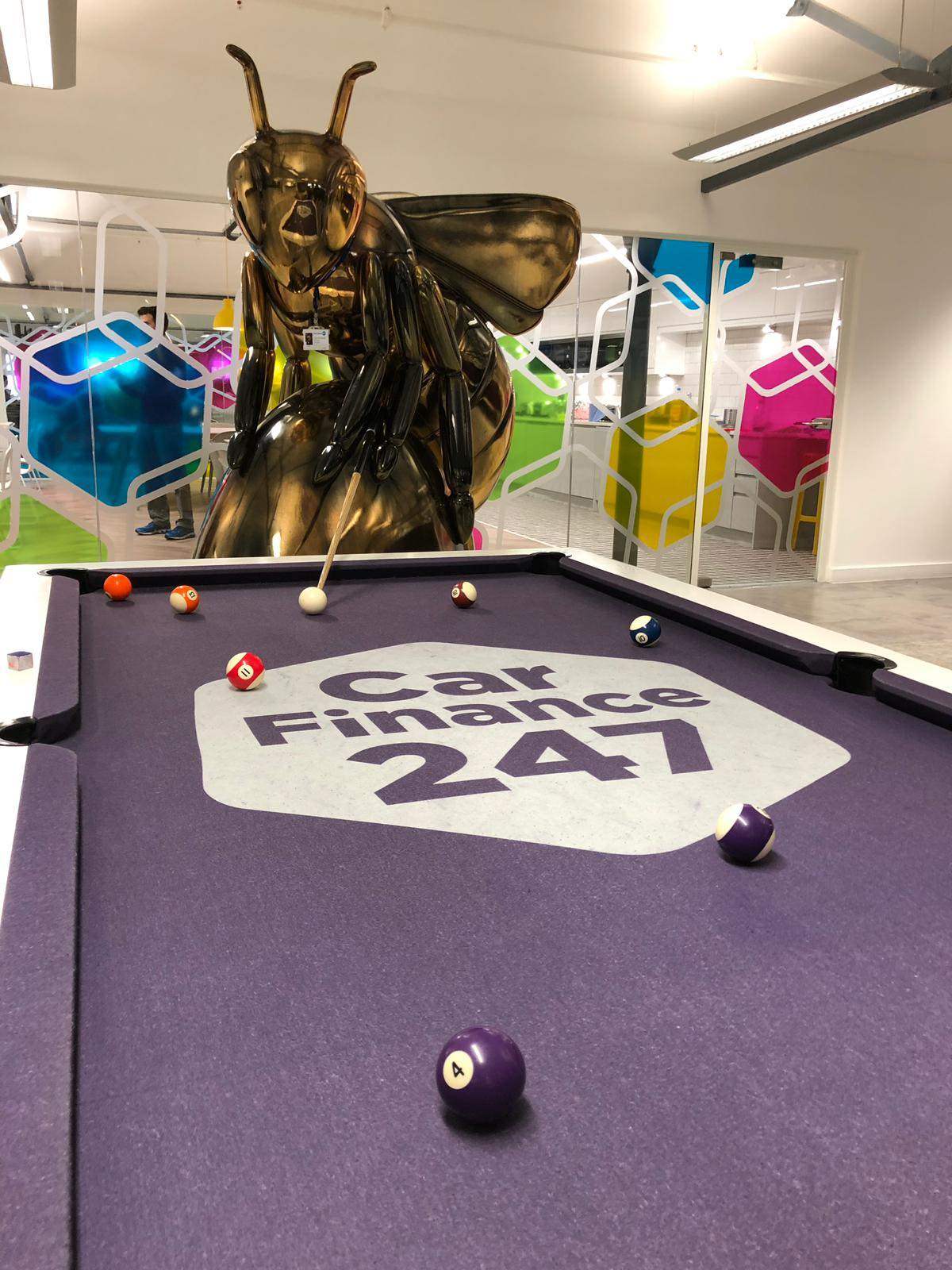 It was the gold finish that provided the inspiration for the bee’s name: ‘Au’, is the chemical symbol for gold, and was chosen to reflect the culture, community and atmosphere of a city famous for leading the way. AuBee was located at the entrance to Manchester Piccadilly station.

How many people took part in Bee in the City?

It’s impossible to know just how many people interacted with Bee in the City – but it’s likely to be hundreds of thousands. Users of the Bee in the City mobile app made more than 1 million ‘unlocks’ as they discovered the bees, earning special rewards, retail discounts and exclusive content. The app’s pedometer tracked more than 10,000 miles and 20 million steps walked by Bee seekers over the art trail. Many more chose to explore without guidance.

Why CarFinance247 wanted to help 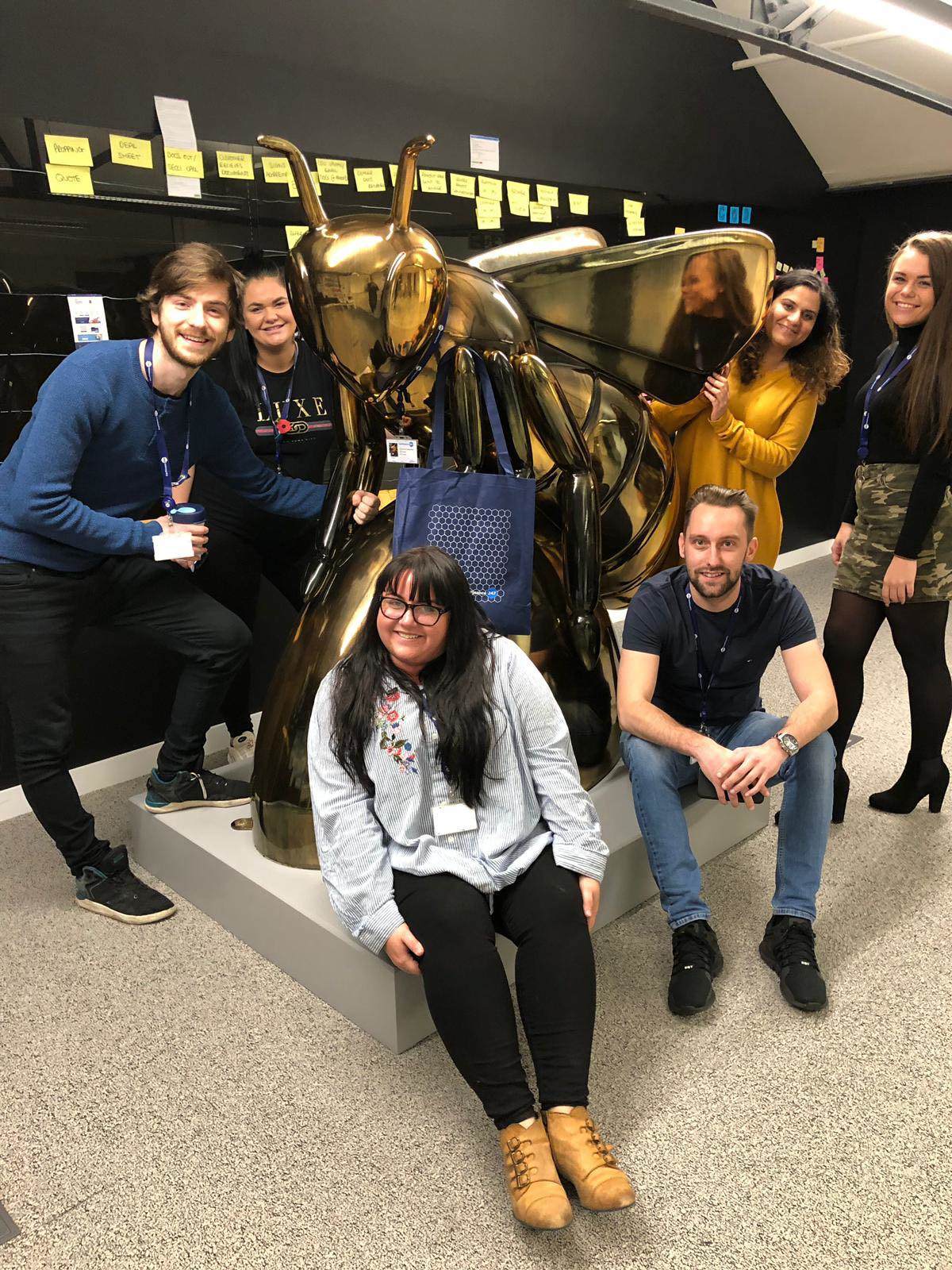 Louis Rix, chief operating officer of CarFinance247, says the fast-growing Manchester company applauds the Bee in the City initiative: “The values that our bee represents will be a symbol of our commitment to helping to improve the everyday lives of people within our city. Just like the bees in the city, we aim to make an impact, to brighten up the local communities of Manchester and promote ‘beeing’ who you want to ‘bee’.”